When it came to visiting back home nothing says a good homecoming than my finding new spots to check out. My best friend, old dance crew family and girlfriend in tow at various times made the return visits more enjoyable than ever before. I began to abandon the whole idea of how much I loathe this place in the past. Burying everything (and anything) represented by my disdain of this place. Finally a clean slate… one that was long overdue and these next couple of posts are truly representative of that. The East Bay’s nightlife has become more abundant over the years especially due Oakland’s resurgence of art depicting it as a “Cultural Destination” quipped by the New York Times. Followed by the appearance of many Hipsters, Art Snobs, Indie Galleries and Food/Drink Eateries popping up (especially the notable Commis; The Special One Michelin Star restaurant in the Oakland Hills).

The once abandoned neighborhoods of Uptown, Northgate, and Downtown are now hot destinations for the younger and upcoming generation of professionals. But before we get into that let’s finally back track to the New Years Celebration… 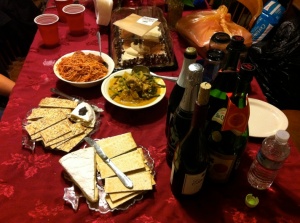 With the later additions of the Tiramisu cake and our Bubbly array of drinks (Champagne and our beloved friend Sake named Sho Chiku Bai; inside joke) we got more than enough Filipino-American plates to feed you.

Earlier in the afternoon we got a hearty introduction to Tinola. This tangy, sour and savory broth brings back that homemade goodness you crave, even in an estranged Filipino household (thankfully not in my case).

This delicacy needs no introduction, we reaped it from the Chinese and refined it with our Indio Muslamic-Malaysian hands. My mother’s version is no pushover and is highly sought after by family members and non-family members alike.

A long-standing tradition in our household, I used to love this stuff as a kid but frankly as I’ve gotten older (and more familiar with Italian-Italian-American dishes) this is stuff worth eating for reminiscent sake. My girlfriend got a real kick out of this dish thankfully, simple hearty and straight to the point. 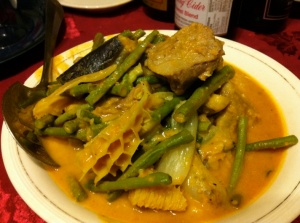 “Carry-Carry” (Kah-rey, Kah-Rey correct enunciation) as Taglish (Tagalog-English or American) speakers would enunciate incorrectly every so often. Kare-Kare is another longstanding dish that my mother specializes in. The honeycomb tripe, protein (in this case beef) and curry broth are all harmonious in flavor and textures.

Most foodies (and food snobs) are also aware of this next delicacy. When there are truffles involved typically I prefer to pair it with wine. Unfortunately, we didn’t have any, so the Sake and Champagne did it’s job. Thankfully this Brie/Truffle combination was pretty on point, nice balance and not too rich as one would expect (compared to the Costco counterpart that currently sits in my fridge, alouette). 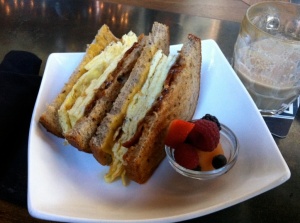 We rang out 2012 with a bang and gleefully (without song and dance unlike the hit show) cheered of our possible prosperity in the New Year. The next morning we were able to drop by an Irish Pub called Commonwealth, the mocha was pristine and sweet, while the breakfast sandwich remained hearty, healthy and filling.

Despite the hangover, a ridiculous storm is heading my way and there was no way I could escape its destruction.

P.S. Forgot to add these last two pics, my bad everyone.

I am a Writer and Food & Beverage Insider/Editor in Chief located within the SF Bay Area. Subscribe to us here on Wordpress (and other social media outlets) for all the latest food and beverage news and trends. Thanks for all of your support.
View all posts by Foodoofus »
« B-Dama: A Catastrophic Evening of Porcelain Chicken
Foodoofus Special Issue Arc: Intertwining Moments at Itriya Cafe: Temporarily Closed (Foodoofus SoCal Finale part 1) »