“The price of anything is the amount of life you exchange for it.” – Henry David Thoreau

Limited Edition: the phrase begs for attention like a toddler grasping for their milk bottle. The psychological marketing phrase that drives demand up to new heights and reaches into the wallets of many who wish to procure a piece of materialistic measure. From fashion series to artisan car models everything is up for grabs and now fast food snacks are a part of the consumerism fray. If you recall sometime ago Lay’s held a nationwide contest to vote for some new flavors, that were deemed ‘Limited Edition’.  As a result many people scoured their local supermarkets to get their hands on these customized flavors.

Looking back at 2013, we had a chance to try and briefly go over some of the saltiest and sweetest creations from all the brands we know and love. So in 2014, we here at Foodoofus swept the internet searching for the top five offerings of tasty treats any foodie (or reseller) would love to capitalize on.

Looks nice, but does it taste nice? Photo Courtesy via Google Search Stock

Pringles White Chocolate (Limited Edition and Winter 2013 Seasonal)
Walmart is notoriously known for having the most affordable retail prices for all kinds of goods in the market. So it comes to no surprise, when I found the original MSRP to be slated at $1.50 per fun standard Pringles can. After browsing through various online retailers (corporate, auction and personal), the price raised $5.00, coming in at a whopping $6.50 a can, not including tax. You can also expect the recent offerings of Pecan Pie and Cinnamon Sugar flavors to follow suit and demand.

Not my kind of thing, but some people like peppermint. Photo Courtesy: Google Search Stock via Yelp Photo Agg.

Oreo: Candy Cane Edition (Limited Edition/Winter 2013 Seasonal)
We already know how much hype Nabisco gives to their Oreo line, however we didn’t expect this peppermint treat to make an impression. As slated on the Target.com website the MSRP is set at $3.00 a package. After snooping around a few online retailers the highest we found as a final bidding price comes to $22.99 a package. Talk about a run for your money, having eight times the markup. 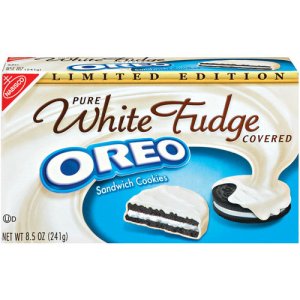 Makes me regret not stocking up on these two years ago. Photo Courtesy via Walmart.com

Oreo: White Fudge Edition (Limited Edition/Winter 2011, 2013 Seasonal)
I remember trying this specific offering two years ago. There were no expectations and it was everything I imagined it would be. A smooth white chocolate coating keeping the Oreo cookie immersed in the center. So it came to no surprise that it came back two years later as a limited time offer. The MSRP on Walmart’s website prior to being out of stock is $2.98 a box. With various indie retailers the highest bid price is set at $41.28.  Twenty-times the retail value means you need to pack a Grant to try this Oreo treasure. 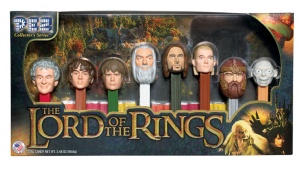 Loved the movies, not really fond of Pez, but a great gift for Tolkien fans. Photo Courtesy via Pez.com

Pez: L.O.T.R. (Special Edition Gift Set)
The trilogy that released worldwide 13 years ago became a fantasy phenomenon. Like any other retailer to hop onto the bandwagon, access rights, and distribute their own signature merchandise from the Tolkien line. Walgreens generosity provides consumers with the MSRP of $19.99 (as usual not included sales tax or shipping). The highest bid price for this compact table package is raised to $75.00 (per gift set purchased). Three and three-quarters the price for a piece of nerd fantasy.

THE COVETED NUMBER ONE SPOT GOES TO….

Lay’s Chocolate Covered Potato Chips (Limited Edition 2013)
If chocolate is the new gold, you might as well call me chocolate digger (lame joke I know). I passed up buying these chips on several occasions. Before you know it, these things are fetching an earnest dollar. According to one source a drug store in Plano, TX has an MSRP of $3.49 (I couldn’t find a CA price). One reseller is testing their luck in marking up this shiny bag for $69.95. That’s literally twenty times the retail value not including shipping.

There you have it, the top five most expensive Limited Edition snacks sought after in the U.S. market in 2014. Will we finally get an assortment of creative flavors similar to our Japanese counterparts? Hopefully, so in the meantime, keep your eyes peeled. Get your snack on and always remember, fortune favors the flavor. 2014 is going to be a doozy.

Tried these and the golden ones, a while back (golden version not pictured) via Foodoofus Instagram feed

Oreo: Birthday Cake (100th Anniversary Edition, Golden Cookie Version)
The MSRP is slated for $2.98 a pack. Given the free market and online hype we come to find it marked up to $6.00 a pack (4-packs being sold at $24.00) not including shipping. Golden oreos for a golden price, not all that glitters is gold sadly. When I tried the original and this version, you might as well place a blind fold over my eyes and call these Grandma’s Vanilla Cookies.

Candy Corn White Chocolate M&M’s, what is this sorcery?

M&Ms: White Chocolate Candy Corn Limited Edition (Fall 2013 Seasonal, Halloween)
Nothing says Halloween than a small bag of M&Ms in your jack-o-lantern. You were a lucky kid (or adult) this year if somehow you managed to snag a single bag (or a large bag) for you to munch on this past year. The MSRP on Walmart.com states $2.88 not including shipping. Currently, the price is set between $5.00-$7.20 a bag (some resellers are providing them in packs of 2 or 3).

I am a Writer and Food & Beverage Insider/Editor in Chief located within the SF Bay Area. Subscribe to us here on Wordpress (and other social media outlets) for all the latest food and beverage news and trends. Thanks for all of your support.
View all posts by Foodoofus »
« Original Ramen Burger Remixed In San Jose
Meticulous Mouthfuls: Sons and Daughters, one star and two parallels »