Do you remember those times of procrastination as a kid? Your mother telling you to clean your room and you get annoyed by the incessant nagging while preoccupied with video games.

How about those high school projects? From those specific high school teachers of history or science, due in two weeks and you procrastinated until four days before the due date, all because you wanted to stay up late and didn’t want to stop playing video games.

What about the college years? You know, those times where the Holy Trinity consists of Ruling the Beer Pong table, Frat/Soror and/or College Org. sponsored parties and playing video games with your dorm/apartment mates.

These things were a higher priority compared to working on your Undergraduate research paper (which was due in three months), all to be cranked out in a 48 hour cram session, printing graphs, developing analysis reports and writing out every single reference before a special academic assistant potentially snitching on you and disposing of your college career in a recycling bin.

Those were the times…

As adulthood approaches the horizon for most post-college students riding the Generation-Y wave of life, we don’t have the luxury to procrastinate as freely. We have college loans to pay, mouths to feed and cars to fill up for gas, to be utilized for daily duties. When Chris first told me that he wanted to do an event that mixed video games and our Food agenda, initially I thought to myself, “Kinda last-minute… ah what the hell, let’s consider it.” Thankfully, everything came together and here’s the result of our work: 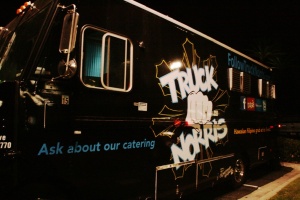 Truck Norris came promptly around 9:00pm, to get ready and prep for the hungry attendees. 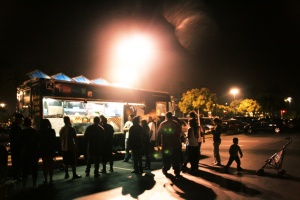 The line began to stack and soon enough Truck Norris began putting out food and service. 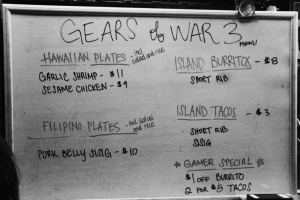 People need to save a few bucks, so Truck Norris gives you the opportunity to stock up on cash to purchase more games (or any other necessity/desire in life). 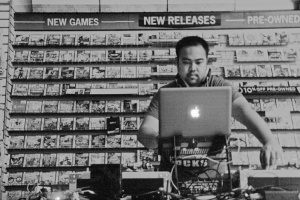 The DJ sets the tone, blasting Rage Against The Machine and Korn to set the tone for the finale of Gears of War franchise. 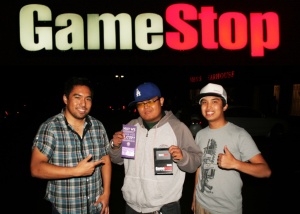 Ephraim The Winner of our Foodoofus Bits and Bites Contest

Our lucky winner to our surprise contest, Ephraim, earned gift certificates to Coffee Bean, Gamestop and some Grub from Truck Norris. 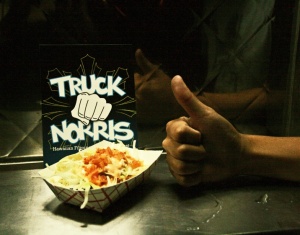 The Rib Taco was sweet, salty and slightly tangy. All the flavors blended well in this mini masterpiece of Southern California food fare. 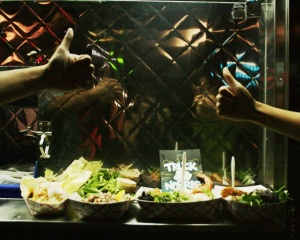 The Notorious R.I.B. burrito was definitely a hit and nearly cleaned out Truck Norris customers early in the evening. Pork Belly Sisig though was my personal favorite, containing glistening bits of kahlua pork fat that dripped on the mini tortilla wrap and along with the acidity of the lemon, gave it a nice zesty contrast of flavor. The Shrimp was properly tossed in sautéed Garlic, resting on a bed of spring salad and rice, giving it a nice reminder of Cajun and island harmony. Lastly, the sesame chicken, nice cuts of chicken breasts, battered in a breadcrumb mixture with a small drip of teriyaki sauce, makes it a hearty (and healthier) alternative to the rest of their offerings. 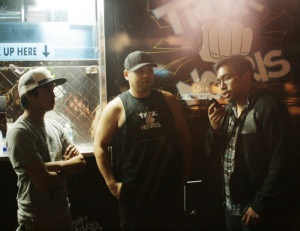 While it wasn’t mentioned in our interview, Ronnie the hardworking head chef doesn’t just cook. He runs an entire department within an Engineering Firm and graduated from the CSCA (now Le Cordon Bleu of LA), and spoke on the importance of taking one’s time while on the kitchen line,

“I’m gonna make sure everything that comes off the truck comes to my standards… you need to cut your prep time, I can but I wont… so I’m not gonna take shortcuts…. you can tell on the outcome of the food.”- Head Chef Ronnie of Truck Norris

No shortcuts means more preparation. With more preparation, means less procrastination. Unlike other Food Truck Chefs, Ronnie dispels any concerns to change his methodology in cooking and flavors developing in a slow cooked pace (not to confuse yourself with the specific type of cooking).

To persevere over any kind of procrastination takes a lot of practice. Ronnie, the gamers quietly waiting for their copies of Gears of War 3 and we (the Foodoofus staff) didn’t take any chances that night to prolonging our goals for a decent turn out. We would like to thank Coffee Bean, Gamestop, Truck Norris and our friends/supporters/attendees who helped with our first Bits and Bites event . Have a great weekend, cheers. 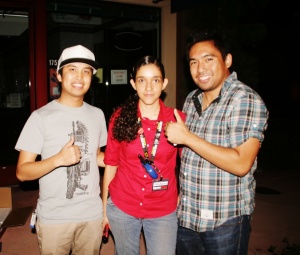 I am a Writer and Food & Beverage Insider/Editor in Chief located within the SF Bay Area. Subscribe to us here on Wordpress (and other social media outlets) for all the latest food and beverage news and trends. Thanks for all of your support.
View all posts by Foodoofus »
« Foodoofus Double Issue #3: Charlie Palmer Demo and Dinner x Memorable Matiki Island Barbeque Part 2 of 2
Foodoofus Double Issue #4: Just Hot Dogs to Paesano Part 1 of 2 »