“I’m telling you this Taro cupcake is really good… you’re missing out, you know what I’m not gonna push it. *offers Taro cupcake anyway*” – Ms. Lo of Hella Cupcakin’

I arrived at the venue as one of the first customers of the afternoon.

The admission was set on $5.00 (which was affordable); however, prices for the food were a little steep given the quality and expectation (I’ll get to that in a bit). I came back from work really tuckered out and sleep deprived — split weekends and working on the weekend really takes a toll sometimes. 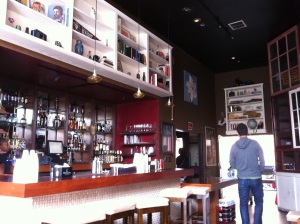 However, you gotta do what you gotta do. I nearly forgot about this event until Ms. Lo highlighted this on her IG (one of the premiere Bay Area Instagramer’s with a personal 17K following with little over a thousand on her 1K small business account). Initially, I was sort of adamant in trying her flavors considering many of them were blacklisted just from experience and personal preference: Purple (Blackberry) Royal Velvet, Passion Fruit and Haupia, Guava and Taro (that accursed root vegetable). I really didn’t want to give the Taro a shot but Lo’ Down insisted, I give it a whirl since she was highly confident in her product. 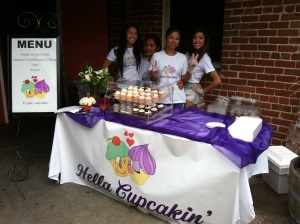 Ms. Lo down and her ‘Hella Cupcakin’ Family

The texture of the cake wasn’t too sweet or dried out, which was refreshing for me after past experiences of judging these things became a nuisance (especially with only one carton of milk or one water bottle on hand). I’m not a fan of Guava, but for those who like tangy things, it was well worth it on their end (my mom and lady enjoyed it). The Purple Royal Velvet was an alternative to Red Velvet. Think of this flavor like Grape Jordan Kicks, stereotypical but true. She added blackberries on some of them and I was informed it didn’t make a difference so I opted out of it. The Passion Fruit and Haupia caught my eye only because I didn’t have Haupia for a long time. Haupia is a standard ingredient in a lot of Hawaiian desserts (lots of Filipinos go crazy for it as well). 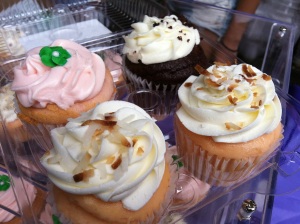 The Passion Fruit worked for me, not too tangy and subtle in Passion Fruit.  I addressed to Ms. Lo that I wanted more Haupia in the core because it would have given this cupcake the one-two punch it needed to bring me back down memory lane.  Still, a noteworthy cupcake in my book was the Taro cupcake, which brings me back to what I mentioned earlier. I really, really did not want to eat this damn thing. Every time I had Taro, whether it was in Dim Sum or any other crazy confectionary concept, Taro was one of those things that never won my heart over, that is, until this one came along. Lo’s version was somewhat of a cop out. The grit from the Taro was absent! She was crafty in finely whipping it into cream cheese frosting, subtracting the Taro flavor from the equation. 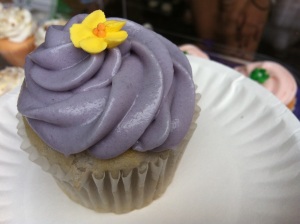 The Taro Cupcake, did it live up to my standards?

Sure it wasn’t a tried and true “Taro” cupcake that I would detest, but for an Asian-American palate that wouldn’t appreciate it at all, the bizarro form is a welcome treat. In special cases like this, blueberry could have been an outstanding compliment to the sweetness of the taro frosting. After dissecting her delicious treats, we took a “covert-shot” of the Vietnamese Elixir (mr. Henny) and bygones were bygones.

Next up to bat, Frozen Kuhsterd, which had a booth shared with Sugar Spun, highlighted two different flavors: White Peach White Chocolate (no picture) and Kettle Corn. The white peach, although it was a sample, didn’t come through and was overwhelmed by the white chocolate. On the other hand, their Kettle Corn flavor made great strides as a promising standard flavor which did not disappoint by any means. 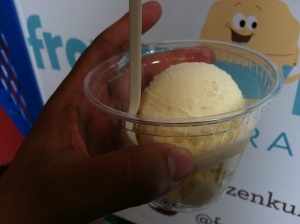 Everything was there from start to finish, salt and sweet folding over and over. The consistency and body was great for a custard (didn’t fall out of the cup upside down). The only components missing were pieces of the kettle corn (or corn flakes) just to give it a little bit more texture. Either way it was a solid job (you might even give Peter’s Kettle Corn a run for their money if you guys keep at it).

Slider’s with a Kick flew under the radar for me given my low expectations with sliders from past experiences (the exception is Sycamore in San Francisco of course). They had three offerings and I couldn’t decide between the first two (Pork Lliempo or Carne Asada). After a bit of back and forth, Matt McCray coerced me into diving head first for the more popular one. Surprisingly, they managed to cook up pork belly quite well. Initially I thought it was an authentic Sisig slider, when in reality, there was a brief touch of “sisig flavor”  but not the textures representative of those I’ve tried in the past. 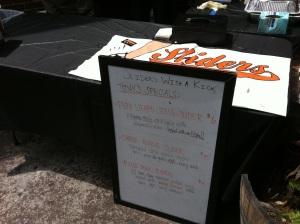 Slider’s with a Kick Booth

As a tried and true Filipino, you need the innards (liver and pig’s ear) to really constitute a true sisig; of course “their kick” with the jalapeños and onions are a welcomed spicy hallmark offering. Therefore, I refrain for my previous comment to you Mr. McCray and would like to rephrase and say, “Thanks for a great slider and I really hope you actually make a real sisig for me to judge off of, in the future.”

Lastly was BBQ @ Lux (colleague w/ Ms. Lo Down) and has his own mini-following on Twitter. His offerings were of two types: Texas BBQ Brisket* and Potato Salad. Now I’m not one to be critical of American BBQ ( I’ll leave that to my colleague Dru to decide). However, based on my own palate, I was craving a bit more with the dish. 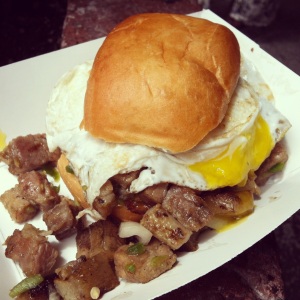 Pork Lliempo Slider from Slider’s with a Kick

The potato salad fell sort of flat for me: I wanted some more elevation to the dish (maybe adding some more mustard seed would have given it a better kick). Don’t get me wrong, if this were some sort of low end American BBQ smokehouse, I wouldn’t mind subpar potato salad but bringing your a-game in the town is essential for me even with smaller side dishes like potato salad.

The BBQ Brisket though definitely had the smoky ring flavor which Dru informed me to watch for in the past when judging good barbeque; however, I felt the corresponding layers of meat outside of the smoke ring sort of dried out, becoming not as juicy as it reached the table. Perhaps it was more of a logistical problem, given the bbq was transported from the street (where the smoker resided) instead of being right next to table, and in that time, what would have been a great platter of meat sort of lost focus. 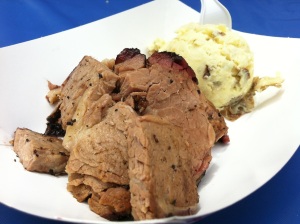 Furthermore, the ends were nice but did not have enough fat hanging off to keep me salivating for more. The burnt ends approach of BBQ is a tried and true double entendre of carnivorous desire to midwest BBQ lovers: without the fatty end, all your left with is nothing but body and no climax in flavor.

There were a lot more dishes I wanted to try but not enough cash on hand to boot. Sunny Side Catering also served a BBQ dish with some biscuits. Whether it was made fresh or outsourced to another supplier is anybody’s guess. Overall, the experience I had with this small pop up was primarily positive despite the cost (spent at least $35.00). A few things to keep in mind in the future for the organizers (or vendors involved): 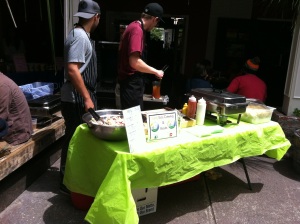 Sunny Side Catering was the 2nd vendor, I didn’t get to try

Either way, it was a win-win for New Parish, the attendees and their collaborators. Whether you were there for cupcakes or an alternative to your classic American BBQ, New Parish attempted to renew your soul (and appetite) during a desolate weekend afternoon in Uptown Oakland.

Social Media meet ups have the same dynamic as the real world, it’s a lot smaller than you think..

Author’s Note*
To correct my mistake after a bit of internet aggregate research (and personal consultation), this wasn’t Kansas BBQ it was Texas BBQ. Traditionally Texas BBQ Brisket is typically done “low and slow” so the eighteen hour lingering “smokiness” was acceptable. However there was an absence of char (which would comprise of a simple dry rub or a complex one). The second possibility of this brisket being cut from the leaner portion (aka flat muscle). Lastly, perhaps the brisket didn’t have enough fat to render from in the first place and ended up being dry during the process. Everything would have been an after thought, if a BBQ sauce was provided as a supplement.

I am a Writer and Food & Beverage Insider/Editor in Chief located within the SF Bay Area. Subscribe to us here on Wordpress (and other social media outlets) for all the latest food and beverage news and trends. Thanks for all of your support.
View all posts by Foodoofus »
« Foodoofus 2 Year Anniversary Special: Humble Hometown (Burgers) Donuts
Ben’s: Waterfront District’s Blue Collar Culinary Corner »