Around the time we were doing this issue of Foodoofus, we came here to pre-plan for the following week on highlighting this place. Our bad luck would turn for the worst, we didn’t have any success finding an alternative. After making numerous u-turns, we finally came full circle and allowed our Nepalese Cherry to get popped to settle on a location.

*Fast Forward to the week after*

Entrance and Exterior Shot of Nikko’s

Finally, I decided to take the risk with my girlfriend in tow to see how a forgotten looking relic on the east side of Alameda still hanged in the balance. For a place that was supposedly open 24/7, I was really skeptical whether or not the doors would be unlocked the second time around. I really did not want to come back here. Coming back here is like being hung up over a one-sided relationship, it was too good to be true. Heard all the lies and B.S. and yet you were willing to torture yourself a second, third, and maybe forth go around. Whether it was the sex (in this case the food) or the benefits you just couldn’t let go of the vice.

Shame on me, maybe giving props to this place wasn’t necessary after all? Nevertheless, I was intrigued because the exterior was the same charm from the place where it all began. Inspiring me to make the brand you all come to know and appreciate to this day, we stepped inside and sat right at the center front dining area. The waitress plopped the menus in front of us and gave us some time to think about our orders before returning. Everything listed in the menu was predictable, pedestrian and somewhat pedantic. The smorgasbord of items offered were listed in the most disorganized manner possible: Eggs, Chicken, Sandwiches, Entrees, Drinks, Fountain Drinks, Oatmeal (had its own special section, with just one listing) and more. The specials had literally six different isolated (and highlighted) boxes for you to fixate on: Weight Watcher’s, Luncheon, Biscuits and Gravy, Nikko’s Special Sandwiches, House Specialty, and House made Chili.

You can argue the menu would have been a great run-on sentence all in itself. The convoluted presentation and the chuckling which followed made for a brief moment in viral entertainment (cue the fox song). Finally the waitress came back, she mentioned her name was Saba and took our orders. We asked her what are the popular items for this place and she made things a lot easier when narrowing down to our final options. Their specialty sandwiches were sought after by the locals and drop ins and of course the highly mentioned Chicken Country Fried Steak (which stole the hearts of a few East Bay foodies). With final deliberation we came up with these two items as the best choices for our dining experience.  The first is what they call, “Nikko’s Special Sandwich, Our House Specialty.” ‘Lo and behold it’s minor hyperbole can be summarized in one phrase, “Omelette Sandwich w/ Fries and Pickles.”

How can something so simple, be so special? At this rate with the amount of times I said the word ‘special’ you can probably make a drinking game out of this entry. The fries were simple, simply crispy with a moist interior and next to nothing on the seasoning. No salt or pepper and the pickles sort of sat on the sidelines like a bunch of second string athletes. Bread was toasted properly, the patty charred in moderation, cheese placed between each layer with an omelette shaped as a secondary patty to complete this masterpiece.

Menu 1 of 2 (The Specialty Sandwich aka Omelette Sandwich) 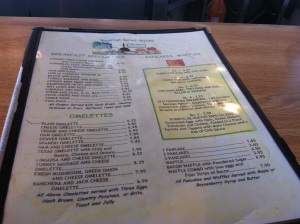 Menu 2 of 2 (Introducing the new challenger)… 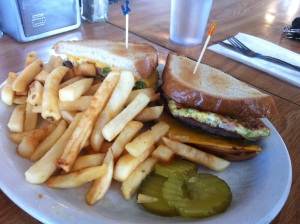 While diving into this first dish, we inquired with Saba about the historical significance and she mentioned briefly,

“Been around for 55 years with three Greek business partners (including Nikko himself), family ownership changed frequently, with the recent owners (Nikko’s already deceased) owning the place for the past 12 years.” – Saba, Waitress of Nikko’s

Which brings up my next question, how did a bunch of Ethiopians begin managing the operations instead of these Greek elder business owners? She then clarified,

“The last of the three original (Greek) partners is still alive and they leased the property to my sister (Lilly) and her husband… this restaurant is one of two places they own including Athenian Deli (Uptown Oakland).”-Saba, Waitress of Nikko’s

Now things are becoming much clearer (and coming full circle) just as I was about to probe a bit further with the origins of Athenian, the premiere dish finally appears at our fingertips. Presenting the one and the only, Chicken Fried Steak and Eggs with Country Gravy. Now I’m not a country boy, I am however a breakfast fiend. No wrong can be done when introducing eggs, chicken and maybe some gravy (if made properly) all on the same plate. After reflecting upon my own failed attempts recreating said component (Worchestershire Chipotle), the failure haunts me to this day. Diving into the unknown beige glop, covering the fried steak I am suddenly awake and aroused by the amount of salt and pepper notes present. The chicken steak was cooked properly, balanced and lightly battered without any additional seasoning necessary. The eggs were made to standard and the hash browns remained crispy. This must be the Greek-American dream Nikko strived for in the late 50s-early 60s as an entrepreneur. He had no sense of organization, cooked only the American classics many truckers and locals appreciated and everything was special to him. You can even say he took a bit of Socrates’ influence in that, “He knew nothing…” Nothingness which is a common ground to the original theme of this blog. I started out as a man, who knew nothing about food and drink. Stupid, Blockhead, Dufus, and every other noun known to man. At about the time my girlfriend and I were ready to leave, Saba (our waitress) still apprehensive and skeptical about my intention probing and plaguing her with a million questions an hour, finally gave us our bill receipt and wished us a good day.

With the superficial investigation it made me curious whether I should dig deeper and explore the confines of Athenian Deli (Mediterranean cuisine, one I do not enjoy and struggle finding civility with) to get to the bottom of this. Will I finally uncover the deeper intentions of Saba’s family and their connections with the Greeks? Only time will tell…One thing I’ll never forget, you can always enjoy life and all its pleasures. Without remorse and full of ignorant bliss, the only thing that cannot be amiss, is the nuance of Nikko’s gravy.

May you rest in peace Mr. Nikko as your legacy lives on through the enclave of Ethiopian entrepreneurs in the East Bay.

I am a Writer and Food & Beverage Insider/Editor in Chief located within the SF Bay Area. Subscribe to us here on Wordpress (and other social media outlets) for all the latest food and beverage news and trends. Thanks for all of your support.
View all posts by Foodoofus »
« The Flavor Profile: Salt
The Flavor Profile: Butter »