“I wanted to learn everything I could about what it takes to be a great chef. It was a turning point for me.”
-Thomas Keller

The pursuit of knowledge can only be fruitful when a man embeds his passion with full commitment and absolutely no regrets of that decision. This is same reason that we are all bounded together through conflict, sorrow, and joy… The sun rises and we begin anew embarking on our personal path of enlightenment, pushed by this idea of purpose. 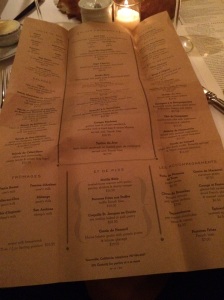 The Menu… so many choices… so little time.

Currently, I am in this same turning point (state of mind). Venturing out to Napa for my birthday having a sagacious moment with the afternoon sun hitting the fields of the harvested grapes of the valley, I begin to question myself…Do I really love food and drink as much as I say I do? Am I a selfish man for manipulating my passion as a brand bovine? Will I be able to keep all of my promises?
After reflecting on such thoughts, looking around the crimson autumn colors and faded grasslands embracing the Napa horizon, it’s quite a sight to see. More accurately, the seven mile stretch is a tight strip, home to many Celebrity Chefs and sustainable vineyards/purveyors who share the space in harmony and competition. I had no clue where I was dining and it wasn’t until two different menus were presented to me for the evening — only to seal my fate because of my displeasure with the idea of having carrot cake for dessert. Dimly lit and without a clue, I walked around the corner only a few steps away from the entrance of Bouchon. A pleasant surprise, the other place I rejected was ‘ad-hoc’ (stupid, stupid me), still gracious for the gesture, I smiled and we went inside.

Prior to opening up the trilateral franchise (Bouchon, Ad Hoc, and the Legendary French Laundry) Thomas Keller was a humble man who cooked his way to the top. Exquisitely maintaining his promise of culinary minimalism, he let the ingredients speak for themselves and crafted his techniques night after night in the beautiful countryside of Yountville. According to sources, Keller decided to open the Bouchon franchise with the concept of having a casual place to hang out after his demanding service in French Laundry. Later on, the nonchalant French Bistro had a sibling, Bouchon Bakery, bringing an alternative side of the coin, with rustic breads and delicate flavors anyone can enjoy without breaking the bank at French Laundry. 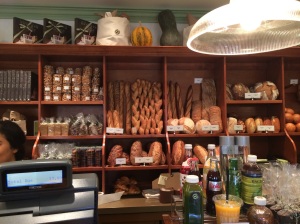 Given that it was a surprise, I wasn’t really prepared to take all the photography shots like I usually am so apologies on that end.

To give you some sort of imagination, think of the Great Gatsby, everything was traditional white table-cloth, suit and tie personnel and lipstick red furniture.A saloon bar took up the entire back wall of the restaurant whereas table and booth seating remained the theme, seating up to at least 60 persons on a busy night to my memory and estimate. The waiter seated us at the corner near the expediting door. It wasn’t the most romantic place, at least I got a glimpse of this place’s floor chemistry. Whenever I walk into a spot, the first thing I observe is the traffic flow within the entire place. If the staff and the patrons of the restaurant don’t clash with one another and everything remains in clockwork, I am in heaven. If the place is a bumper car rally, there’s something that needs to be said. Thankfully, this place was clean and smooth like a baby’s bottom and they dropped off the menu just in the nick of time…My eyes wandered all over the place, everything sounded good on the menu. Unlike Ad-Hoc and French Laundry (I own both cookbooks, mind you) I had no idea what this place offered. Everything was humble and straight forward, nothing unpredictable and everything flavorful. Within a good ten minutes we finally got down to business and ordered the following items:

In my own words, this is simply a Scallop Puff (one hell of a scallop puff) at that. Flakiness is the name of the game, with the shallots, celery, and scallops married and woven intimately like a spring basket filled with goodies. Brioche and Ossetra Caviar, no good deed would be done when these two ingredients combine. To add more to the gluttony expedition, not pictured we had our choice of creme fraiche, mashed boiled eggs, shallots, capers and crab to add-on top. Simple, delightful and a bit over the top for seafood toast. 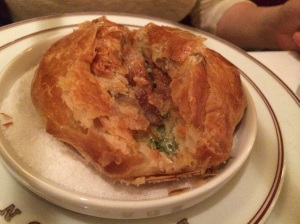 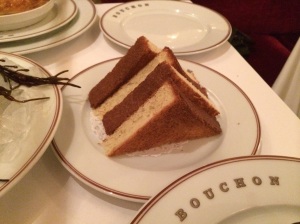 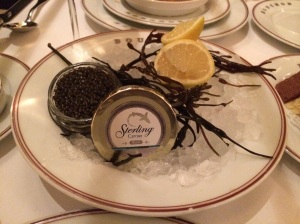 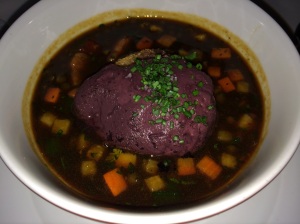 You ever heard of the movie, The Hunt for Red October starring Sean Connery and Alec Baldwin? Unless you were a 70-80s baby you wouldn’t really remember this movie. This dish represents that movie in a nutshell, you’re literally drowning in red wine sauce, all of the vegetables are underwater bleeding communism and american patriotism all-in-one fell swoop. Only when the sun (poached egg) surfaces and breaks on the top, does it break the spell of the deep and complex sauce. 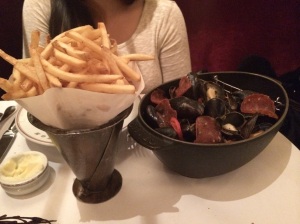 This was a hefty dish, comparing it to the version I had at Joshu-Ya Brasserie (Berkeley, Ca). The Pepperoni (Chorizo) overwhelmed me in an instant, masking any trace of the sweet peppers. On the flip side, the mussels were nice in texture but absorbed a lot of the chorizo broth in the process. The fries were crispy and abundant and would have complimented the broth more if there was a dash of truffle salt in the mix. 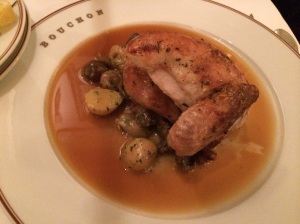 Growing up eating chicken was synonymous with eating rice. I’ve had it in the hood (Church’s), Asian joints (that mystery 1980s hole in the wall joint in Old Oakland Downtown, R.I.P.) and a variety of “new American restaurants.”

This is probably the heart and soul of Thomas Keller, the Vitruvian man, in poultry form. Button mushrooms, Cippollini onions and fresh potatoes glazed and soaked in the copper bath drenched in natural chicken sweat, chicken jus and sautéed liver. The balance and layers of flavors, continuously spinning like an endless merry go-round. I’ve detested chicken liver for as long-lived as I’ve been on this planet and Thomas Keller changed my mind about it. Vividly looking back that evening, scooping every millimeter of that plate right to the last drop of that golden brown sauce:

You want proof of culinary excellence? Ask him to make you chicken and if it doesn’t bring about the same ravenous hunger, bewilderment and entertainment I’ve felt, then you haven’t the faintest clue what kind of withdrawals I’m going through at this moment typing this post out. The funny part is, I love truffle, toro, berkshire pork belly and everything savory, luxurious, and full novelty compared to the next food lover. This chicken dish,more like you must eat this because it is life-changing. Call it an exaggeration, but the rest of this post might suffer due to my undying devotion to this dish.

After my spectacular entrée, dessert followed and it was a complete letdown: 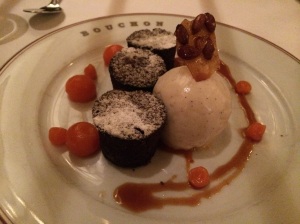 Bouchon Brownies and a collection of Pumpkin flavors

The brownies served as a signature symbol to the restaurant’s name (bouchon is loosely translated as cork in french). Powder sugar on the brownies served nothing more than dust. The pumpkin ice cream was a bit on the spicy side. Whereas the pumpkin seed shard served as another meaningless aesthetic as a peacock along with the bits of candied pumpkin and caramel sauce encircling the lackluster plate. 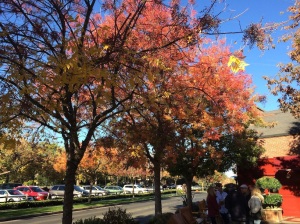 Overall, the entire meal was satisfactory for the most part but serves as a reminder to the TK’s totem pole as a taste to the culinary maestro’s full imagination and arsenal. After paying our bill and visiting several other detours within Napa, we finally returned the following morning only to see the other side of Bouchon, the bakery portion. Unlike the bistro segment, the bakery served as a tourist hub for many people to explore TK’s morning-glory. 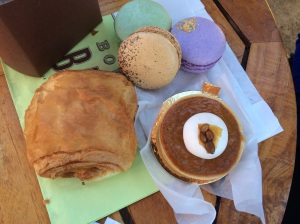 The Bakery Trio of Bouchon Bakery

Many Canadians were ‘aboot’  asking about some French Lingerie, many were disappointed only to find themselves in a celebrity chef’s Patisserie. As I featured on my Instagram and Yelp review out of all the offerings in this trio, the only items that stood out were primarily the Pumpkin Pie and PB & J. The chocolate bread was flaky, chocolate was rock hard and tasted pretty stale. The Pistachio tasted with aromatics, the espresso was decent, nothing to rave about, but the PB & J was solid and balanced. The Pumpkin Pie became my standard to all pumpkin pies and if it were in cheesecake form, it can certainly rival this iteration as well.

As I find myself wrapping up this post, I take a look at the last picture of Napa: Barren and full of vegetation under the lukewarm autumn sun. Coming full circle, I feel like a man caught in a three-way scandal between two lovers. The first love is memorable because they took away your innocence and replaced it with a skill (or purpose) worth fighting for. The other one is rational and subservient, always looking out for your best interests even if the odds are stacked against you.

Is it possible to maintain these menage-a-trois to the bitter end? Or, will I be forced to pick one out of necessity? 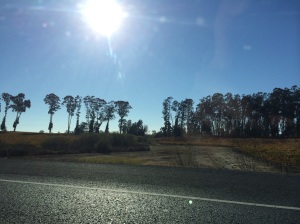 There’s so much I want to divulge but…I’ll remain civil in the meantime. Thanks to Thomas Keller, Chef Sandoval, Chef Weismann and the rest of the Napa folks who made the experience memorable.

I hope I can come back someday…

I am a Writer and Food & Beverage Insider/Editor in Chief located within the SF Bay Area. Subscribe to us here on Wordpress (and other social media outlets) for all the latest food and beverage news and trends. Thanks for all of your support.
View all posts by Foodoofus »
« 1:15 to Napa, Four Times The Birthday Binge (Double Issue 1 of 2)
Original Ramen Burger Remixed In San Jose »