“What is the point of being on this Earth if you are going to be like everyone else?” -Arnold Schwarzenegger (Ex. California Governor/Celebrity Bodybuilder)

Originality plays a role in all forms of life. A lot of people believe that the core idea of originality isn’t necessarily belonging in of itself but rather a gathering of knowledge from previous eras and individuals. 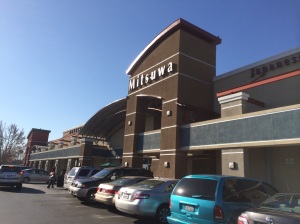 The origin of the hamburger has two parts: one being the term itself derived from those of Hamburg, Germany, whereas the second part arises from countless arguments pre-dating 113 years in United States history between seven different accounts.

On the flip side, you have the other half of the foodie phrase in question when referring to the history of ramen. The belief that the early roots of Chinese noodle tradition vs. The Modern form of Ramen (instant ramen) is the real history of the popularity of ramen still holds strong well into the 21st century. Nevertheless, the cold winter morning did not stop me achieving enlightenment with the original Ramen Burger. Now if you remember my first encounter with a faux-ramen burger, I felt like a cheap noodle slut. The lack of flavor and structural integrity created a black hole in my stomach. Reminding me of old ladies who couldn’t afford high-end bags and ended up getting ‘Berburry’ substitutes on their shoulders. After a swift 45 minutes, I finally arrived at the scene. With some advance planning (and associate initiative), I was able to score a decent spot thanks to D.T. and his college entourage. We were rolling probably five people deep, so it made a lot more sense for us to explore how long the rest of the line was. 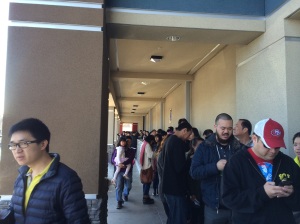 Front of the Line 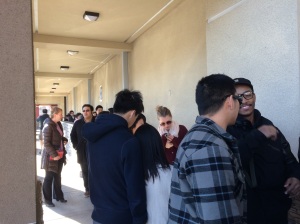 Middle of the line 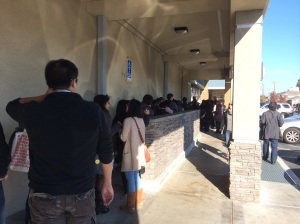 and the back of the line… for now..

Within thirty minutes I was able to make several candid interviews with groups of individuals in the line and asked them the simple question,”

“Why do you want to try the ramen burger?”
THE TOP RESPONSES WERE:

“Never had anything like it before”
“I’m vegetarian… and I would like to try it in a heartbeat.”
“So I can brag to my friends.”
“Because… it’s the trend.”

Hype, trendy and bragging rights… any social phenomenon that promotes exclusivity can bring out the best (and sometimes the worst) in people’s expectations of any group experience. After charging through the sea of foodies, the gatekeeper of the Ramen Burger admitted us inside only to find, 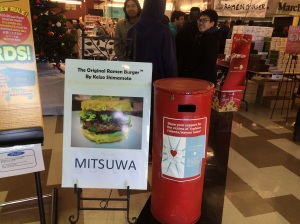 A line intermission and poster in addition to.. 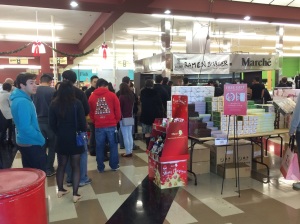 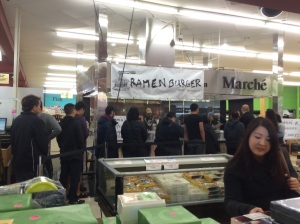 …that kept going until… 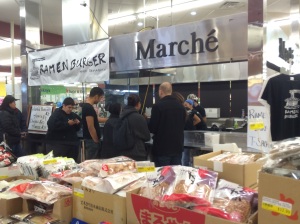 You got to the front and saw the final prices.

At this point, I know what some of you are thinking…

“Foodoofus, you promoted on Facebook that it was only $8.00 and etc.”

Yeah well…you weren’t the only one who shocked at the surprise announcement. Given that I am a glutton, double patties with cheese became my objective; however, that didn’t prevent me from trying a traditional one just to give a fair comparison. After paying $30.00 bucks for two doubles and one regular, I decided to get an extra one in case I had a hankering for more.

What’s more interesting is the team was highly efficient in the unfamiliar booth, their stations separated into three parts. The first being the searing of the ramen buns, second was the cheese and seasoned patties and last was the garnishes of some unknown black sauce and green onions. To give you a better idea… 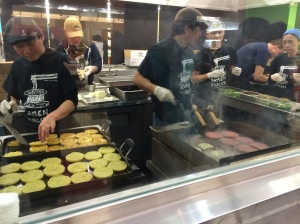 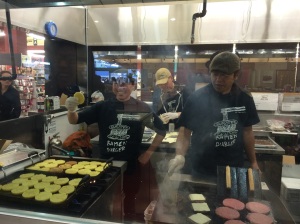 Here’s my verdict on the original one:

Unlike SO’s version, the ramen burger noodle buns had texture (bite) and the meat was flavorful (got a hint of cumin of the griddle). The vegetables (spinach and green onion garnish) didn’t really do much for me other than add color. The most ingenious thing was to create a fail-safe (the wrap) to prevent the whole thing from falling apart. The unknown black sauce added the necessary depth to round out the dish. For this iteration, I would’ve felt satiated and beyond grateful paying a few dollars less for an authentic experience.

For Jeff (Keizo was in NY) and company, they wanted to sweeten up the pot for many of the Bay Area foodies who journeyed over here. Just before things got hectic, I squeezed a short minute interview with him and got the exclusive buzz that one Bay Area round wasn’t enough. The next destination in the Ramen Burger tour is none other than in San Francisco There are no specifics regarding choice of locale for the pop up but they’ll keep all of us posted. Going back on topic, the true testament to this blogger creation upgrade.

Words alone cannot describe just how much I enjoyed this thing, even with a few modifications. The important factors to enjoy a burger are to taste the ingredients in isolation and harmonize them altogether while you’re chewing through the compact product.The buns all seared to perfection thanks to the Sesame oil treatment it got before it hit the griddle giving a toasty element to it. The meat itself was seasoned on the outside with salt and pepper but also had nuances of seasoning within the patties, cooked medium rare and juicy with every bite. Finally the vegetables, sunk into the cheese (can’t determine if it’s havarti or white cheddar) and soaked with enough of that black sauce, giving it the final splatter on the gluttonous expedition any food lover would appreciate. To slightly nit-pick, there’s one suggestion I do have for this dish: Ever consider using toasted seaweed? A plethora of Japanese-American dishes (Japadogs, any type of Asian fries, onigiri and etc.) add it at the very end. Otherwise, the additional component will be soggy, thus rendering it useless in texture. Definitely cliche. However, if executed properly, it can add another dimension to the dish. Originality shouldn’t be measured by distinction but rather the undying stamina a man retains when conquering established doctrines. Entrepreneurship encourages all forms of starvation (mental, physical and emotional) bringing about a revolution in the form of an original service, widget or in this case a familiar presentation of food.

Overall, I am beyond satisfied with Keizo and the Ramen Burger crew for bringing their A-game to Bay Area. If this is any indication of the future of food, then as a blogger, food lover, and entrepreneur… I got my work cut out for me.

Cheers to the final bite!

Author’s References
*Author’s Note: As always remember all General Wikipedia articles are not official sources, rather the footnotes hold greater weight as legitimate citations. Furthermore, it is only to provide a general outline for those unfamiliar with the back story of many of the ingredients.*

I am a Writer and Food & Beverage Insider/Editor in Chief located within the SF Bay Area. Subscribe to us here on Wordpress (and other social media outlets) for all the latest food and beverage news and trends. Thanks for all of your support.
View all posts by Foodoofus »
« Meticulous Mouthfuls: Bouchon The Bountiful French Bistro
Special Issue: Overpriced Online Snacks Of 2014 »