Foodoofus Pre-Holiday Edition: A Price(less) experience to pay at Animal.

“Sir, I’m sorry considering you were late for your reservation, there is a bit over an overlap and we have to reshuffle reservations so, would you like to sit at the bar instead?”

Are you fucking kidding me? Again… the bar… the fucking bar? I love bars and lounges… just not when I’m in a popular sit down restaurant in Beverly Hills, unless I’m playing pick up artist to another Hollywood actress or model but that’s besides the point. Let’s backtrack to why I dislike the bar seating, especially at swanky sit down restaurants like Animal. It all started back at Son of a Gun (the second establishment ran by the same owners, Jon and Vinny). Unlike Animal… I actually spent a pretty penny here on my dime, getting valet, walking to the restaurant and waiting for open seats… as soon as I get there the hostess says to me, “Sir we don’t have any open tables available and we apologize for that. But would you like some bar seating?”

That’s where it all started and let’s just say a lot of things happened and if you want the full account feel free to read it right here. Back on topic…

If there was one way to describe yesterday’s weather, just imagine Thor masturbating to his poster chick Lofn and in the process spilling out chilly howling winds and sparks of lightning astray. Yeah, it was that bad, even after leaving from my house 2 hours in advance (a big mistake I found out much later). I called in 15 minutes prior to the actual time of my reservation and informed them of my later arrival. There were no calls back and as soon as I got to the restaurant with P.J., all the hostess said was… “We have to cancel reservations if people don’t show up past a certain amount of time on their reservation, otherwise we have to re-shuffle and that’s difficult.”

When those words came out of her mouth, petrified for a minute and suddenly enraged the next. Their general manager came out to handle collateral damage and reminded me of their system, by then it was too late and ruining my mood for the duration of the evening.

Don’t get me wrong, I understand a lot of this stuff, not only as an avid gourmand (or foodie) but as someone who works in the restaurant industry. If you don’t believe me well….here’s a surprise, I’ve been working in a restaurant for sometime now and it’s tough work (It’s one of the many jobs I have currently). If you seen me before (or know where I work) great…just don’t spill it out. Otherwise, I’m aware of the difficulties of making everyone in the restaurant happy. From the moment the host/hostess (is she a bitch or an asshole?) seats you, to the arrival of your meal (better hope the staff didn’t taint your food, especially if you’re one picky person).

If it was my fault, then I would have no one to blame but myself. However I cannot control the weather (it was chaotic afternoon/evening), or the LA/OC traffic (left almost 3 hours in advance, should I have spent an entire day in Beverly Hills just to make it on time?). Either way, if I were more “favorable or renowned” like other critics (or associates) in this industry perhaps this wouldn’t happen? However this black sheep of the pack has to keep on writing and here’s the rest of my take on the price I paid for this meal…

The Animal Offerings (Gaze upon the menu)

Showing courtesy (and being awarded limited time) we figured to get started by ordering the following items:

For a red, this wine wasn’t too overpowering on the palate. Had a slight nudge on the initial taste, a small pause and an abrupt finish. The only dish, I felt it complimented well was the Foie Gras biscuit, but we’ll get to that later…

This dish, chosen by P.J. was a great starter. The sweetbreads were nicely cooked and the aioli became the star of the show. Little bursts of lime bubbles pop in your mouth as you wrap around any of the components.

I understood the point of this dish, however it tasted like a regular spring roll. I wanted to get a hint of the shrimp, rabbit, or both. The main highlight of the dish was the green curry sauce, You will definitely get a spoonful of Southeast Asia with every drip.

Who doesn’t love fat… especially when it’s in the form of bone marrow. A classic french dish, with Brazilian flavors. Straight forward and within five bites it was all gone. 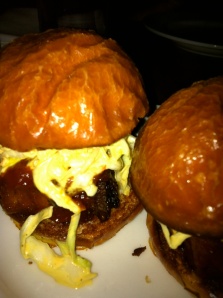 The Forth Dish: Barbeque Pork Belly Sandwiches and Slaw

I prefer my pork belly in Chicharrones (Latin form) or Moist and tender within a steamed bun (Asian form). The Brioche is a nice substitute and the barbeque had a nice char and remained dry (even with the addition of slaw and barbeque sauce).

Steven our waiter hit the nail on the head with this suggestion. Originally, I was going to try the Foie Gras Loco Moco, however he insisted on us trying this particular dish. You know McDonald’s Sausage McMuffin? Instead think of creating a tasty pool of maple syrup and sausage gravy, with a nicely seared piece of melt in your mouth foie gras x white sausage (get your mind out of the gutter), sitting on a warm crumbly textured biscuit. Heaven on earth for those blessed enough to try this dish, whereas the ducks sit through fat camp in the slaughterhouse. Force-fed many cups of grain at a time, until their expiration date.

The first dessert served as a palate cleanser, the type of dish that’s supposed to wipe away your PETA sins for consuming too much foie gras in one setting. Berries were fresh, the crumble was crunchy and the custard felt more like a cream (wasn’t in the thick hardened pudding texture I was looking for). 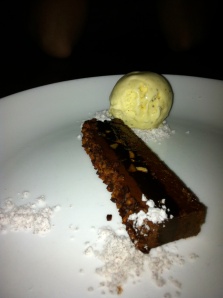 With this final dessert, I was left speechless and satiated. Bitter chocolate, bits and pieces of crunch bar, with a smoky bacon after taste, displayed in a solid chocolate covered brick even Montezuma himself would be proud of. Accompanied with Salt and Pepper Ice cream, wrapped all the flavors together for a solid finish.

As I write the conclusion for this entry, I really wanted to enjoy this place for what it’s worth..sadly my appetite (and expectations) had diminished after the incident. All too often we get caught up in the smoke and mirrors any food or drink would give us when were hungry, tired, upset and etc. We don’t consider (or appreciate) the experience in the restaurant, until that we are robbed of said privilege (as a customer). Therefore it is essential to lock in great customer service from the start and to do your best to cater and compromise (instead of snubbing and/or isolating them in the process, coming from personal experience at other high-end restaurants).

So I beg the question, in the end… who really paid the price? Was it Steph (thanks again for the generous gift)? Myself? The Duck(s)? Was it worth it? I don’t know, I’ll let you the reader be the judge of that.

I am a Writer and Food & Beverage Insider/Editor in Chief located within the SF Bay Area. Subscribe to us here on Wordpress (and other social media outlets) for all the latest food and beverage news and trends. Thanks for all of your support.
View all posts by Foodoofus »
« Foodoofus Double Issue #6: My Birthday Celebration (Sushi Wasabi and Orin Swift Wine) x Genkiyaki: Zombie Taco Debut Part 2 of 2
Foodoofus Special Issue: Christmas Edition 2011 »